Social media can be essential to the success of your real estate business. You have to communicate with people as well as possible. Social media websites are a part of what works.

You can use social media to interact with your clients and to make your work more inviting. The effort also helps you in creating something that people can trust and appreciate.

You’ll need all the help you can get when managing a social media plan. You can ask us at ShoreAgents to assist you with whatever you want to get from your social media routine.

Do you want to see how outsourcing works?
KNOW MORE

Why Should a Real Estate Business Use Social Media?

The odds are you’ve used a social media platform at some point today. You might know how essential it is to your life today. But you also have to note many things surrounding what works here. Social media is useful for many reasons:

You don’t have to be an expert in writing on social media. You can post messages showcasing your work and images involving your properties. Advice on whatever you offer and how you can help people also works.

2. Everyone is on social media.

The number of people on social media keeps growing every year. Facebook remains the top social media platform, with about 2.5 billion people worldwide using the system each day. There are about 220 million active Facebook users in the United States, plus another 20 million users in Canada and 15 million in Australia.

Instagram has also been growing, with the social platform reaching its billionth user as of late. You could also target professionals on LinkedIn, as that site has about half a billion users.

Social media is often where people first learn about stories and things from around the world. People trust social media platforms to help them learn things and to get together.

You don’t have to be overly serious or technical with your social media. You can be yourself and make your content more viable and interesting to everyone.

Social media is essential to the success of your real estate business. Planning a campaign can give you more power over your work.

Are you ready to get started and hire now?
KNOW MORE

Organic vs.
PPC – and
Why Organic Is Better

You can utilize social media in many forms, but there are two methods to consider. The first involves an organic practice that entails making your pages read well. You might use keywords, photos, and other things that make your work visible. Sometimes being more active may also help you in making your content easier to find in a search.

The other solution you can utilize involves pay per click or PPC social media. The practice involves paying for when people reach your site through keywords and other parameters. The design may help you be visible in less time, but you’d have to watch for how much you’re going to spend here.

You could run an organic solution, or you could pay for play. But going the organic route is best because it entails gathering an extensive audience. You’ll find people who will want to support your business and pay more attention to whatever you wish to share. Organic social media also leaves a stronger impression in everyone’s minds. People will see what your brand is about and be more likely to contact you when they need to buy or sell a property.

What Is the Point of Social Media for Real Estate? 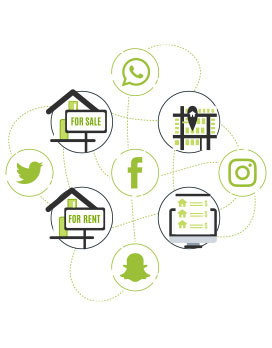 Social media for real estate entails connecting with your audience. You’re showing that you get what they want and that you have solutions for their desires.

Social media entails being authentic to your audience. The advertisements you post online might not feel as pure as what social media can provide. Social media makes you look more natural and interesting. The work makes it easier for you to stay marketable.

You want to show that you’re going to help people and that you can save people money. You can also show that you have good investment advice to anyone who needs help.

People will expect that you’ve got properties for sale. Social media lets you engage with people and let them know what you have to provide. You will help people see what is interesting while also being relevant and engaging to your audience. You can even talk about how you can add value to whatever people wish to manage.

Do you want to see how outsourcing works?
KNOW MORE

The most important part of social media is that you can advise people in understanding what they might require. You can talk with people and discuss what their plans might be and whatever might be more viable.

Social media is about bringing in people and making them want to trust your business. You don’t want to spend lots of money trying to market these people. Social media helps you become easier for people to trust.

Social media will make a difference in helping you gain leads. Social media helps you build an audience. You can bring in people who live in your area and will someday buy an investment or move to a new house. Social media lets you get in touch with these people and to establish great long-term relationships.

The methods you have for producing leads can vary over where you go for work. You could create a chatbot that lets your site communicate with people whenever they have certain questions.
You could also target an audience with a messenger program that responds to queries people have surrounding your ads. But you need to have a call to action that is effective and makes it look like you understand the needs people hold. You have to put your product in front of people while establishing trust. People will want to speak with you if you can establish that trust.

You have to put in enough social media posts and automation features to make your business more attractive to prospective home buyers or sellers. You cannot get people to be interested in your work off of only one post. You have to put in enough consistent behavior and support to let people see why your content is so valuable.
Your work should target the unique feelings people have towards real estate. Everyone has reasons for why they want to buy and sell properties. Your social media plans can include efforts that target whatever things people desire the most.
Are you ready to get started and hire now?
KNOW MORE

Can You Get a Real Estate VA to Manage Your Social Media?

The social media landscape is thorough, but it is also complex. You have to know where you’re going if you want to make social media work for you. But you might not have as much time to plan your work as you might expect. That’s where a real estate virtual assistant or VA can help you with your work.

A real estate VA will assist you with your social media plans by arranging much of the content. You can ask a VA to help plan posts and write content that fits whatever interests you the most

But you should know that a virtual assistant will not know your business as well as you. You are still responsible for delivering your plan for what you want to do for people. 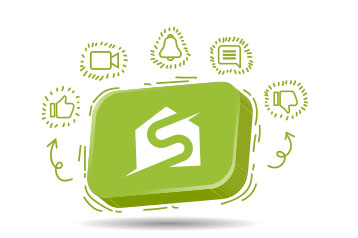 The VA will execute your plan. But you have to hold a routine that your VA can manage. You need to provide a good plan that is easy to follow. Failing to create something useful can keep your site from being easy to find on social media.

You can direct your VA to understand what you can do with your social media content. Your VA can manage your work only when that person sees what you want to do and how your content will appear.

You can ask us at ShoreAgents to assist you with your real estate management needs. Our virtual assistants have gone through proper social media training courses to help them understand what works when promoting a business. Our VAs know that your business has distinct needs that you must follow.

We have VAs that can work on anything from our office. You can send a message to our workers about what you desire, and they will see what can be done. Be specific when telling you what you want, as the rules for managing a project can vary in many forms.

Our social media experts at ShoreAgents can deliver a full plan for work that suits you and your desires for success. Contact us today to learn about our roles and the pricing we offer for ad-hoc and full-time services. We are available for as little as US $1000 a month, but we can plan a specific quote for whatever things you want us to complete.